Our passion will never die

This rule set was updated on 13th September for the live event. 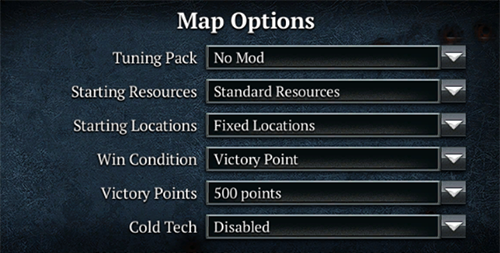 To check that the game has been set up correctly the summary should appear as so:

It is both players' responsibility to ensure that the settings are correct, if they are incorrect the game is at risk of being declared invalid by referees.

There is one coin toss at the start of the series. Performed by the GCS2.ORG tournament engine.

(Ordered 1→4 by preference order for Ace game decider, based on maps that have not yet been played)

However in fairness to viewers please start as soon as you're ready, and help us move the tournament on.

If the referees feel like players are purposely taking the maximum every time they can still issue a warning etc.

The referees are there to help, their main focus is ensuring the tournament is on time, and players understand the rules.

If the referees feel player have broken rules or are purposely wasting time there are a few tools at their disposal. These are all a last resort, and the focus is on having fun, nobody wants to enforce rules.

All bugs and exploits that a player wants to use in GCS2 must be in-keeping with current conventions as built up over time by the competitive CoH community. They also must be known to all players before stepping into the tournament.

Any other bugs and exploits that you as a player intend to use must be declared to compete@gcs2.org if they are acceptable within the spirit of the competitive Company of Heroes community they will be added to the above list.

Bug and Exploits that increase stats and attributes of units are expressly disallowed, including speed, veterancy etc. There are no known cases of this at the moment, but in the past they have been possible.

We reserve the right to ban bugs and exploits as the tournament progresses, and take action against any player that used an unknown bug or exploit to gain a competitive advantage.

Player with bugsplat/ crash/ lost connection - Inform opponent and referee of the situation. Do not touch computer any further, the referee will make note of the situation and verify the crash.

Once video is authenticated the referees will say to replay the game in the majority of occasions.

Unless the game is judged to have been clearly over satisfying one of two 'win' conditions:

If either win condition is satisfied, the win is awarded to that player.

Background: Unfortunately there has been a long standing bug in the game regarding zis guns. It is very rare but it creates an invincible ghost AT gun which can attain veterancy. It is almost always facing the enemy and almost always becomes a huge problem.

Due to it being linked to animations and their randomness it's impossible to willingly replicate. It is also impossible at this time for the community to fix. This rule is the procedure to follow should one occur. It is the best we can do with the given possibilities.

If an invincible zis gun bug occurs the Axis player can order a replay or say to continue the game.

Once they have encountered the invincible zis gun they can either say: "replay" or "continue" in game chat to carry on playing.

If they continue playing for a minute after clearly having seen the ghost zis gun fire, the game is assumed to continue, and a replay cannot be forced.

Once a call for a replay has occurred stop playing and save the replay file as usual.

The Axis player cannot change their mind once they have said to continue.

If the Soviet player has complete dominance and their opponent has called for a replay they can appeal and be given the win by referees. At the point when the zis gun bug occurs they must have had:

By signing up to play in GCS2 and its qualification tournaments you agree that you:

1. Have read and understood all rules. (People without strong English skills please request translation, someone within the community will assist).

2. Will play to the conditions specified by the rules at all times, and play competitively and to the best of your abilities.

3. Will check in for tournaments on time and that not doing so forfeits your place in that tournament.

4. Will play on your primary CoH2 account under the Steam name you are most known as.

5. Understand that players with past behaviour of confirmed cheating (map hacking etc.) are denied entry. Players that have trolled in tournaments or broken minor rules can be given conditional entry provided they assist the project, please contact the organisers.

6. Understand that GCS2 is a live tournament in England and you are able to travel to England legally with a valid passport.

8. Are 16 or over, or have a parent/ guardian willing to travel with you at your cost.

9. Understand all terms of the rules regarding qualification, and that the budget is limited in how many non-European players it can support.

10. Understand that GCS2 endeavours to pay for plane travel and hotel room cost only. (Depending on milestones reached).

Talk to us
Spread the word!

The home of GCS2

The number one fansite.